Spending two summer weeks on an island off the coast of Maine sounds like paradise. Factor in classes that stretch from sunrise to well past sunset, four a.m. seagull cat fights outside your window, and a toilet shared by 13 that no one is allowed to flush, somehow it’s still paradise.

Welcome to Shoals Marine Lab, a summer research institute located on Appledore Island and run by Cornell University. The goal of the lab is to give “undergraduate students a unique opportunity to study marine science in the field… giving students a truly ‘hands-on’ educational experience.” 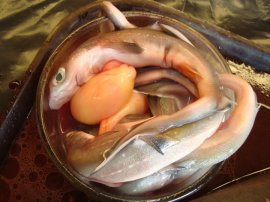 For me, the hands-on experience began my very first day of class with my very first dissection – a baby herring gull, Larus argentatus. Not going to lie, the initial cuts and guts were difficult. It’s not that I was squeamish; I was just hyper-aware that I was cutting into a previously living thing. That awareness increased exponentially when our TA’s ushered us outside, mid-dissection, to band living baby gulls. In what world would that ever be a good idea? Luckily, by our second dissection, a dog fish, Squalus acanthias, I had gotten over my discomfort. I was too interested to waste time gagging.

Days were an endless cycle of dissections, lectures, documentaries, skeletal prep, and field work. Those two weeks taught me more than any one class ever had before. Even free time was spent learning. During time at the swimming cove, our TA would start an impromptu lecture on how to sex different species of crabs, spouting off the various scientific names of each new specimen we caught. When walking by the gull colonies, interns would invite us to help band new chicks. Often at night we’d sneak down to the docks to splash at the bioluminescence and stare up at the plethora of stars.

The two weeks I spent on Appledore were without a doubt two of the best and most intellectually stimulating weeks of my life. Stepping back into my life back home, it took a while to remember that not everyone cared about the scientific names I could list, or the differing feeding habits of minke and killer whales.  Though I had only been gone two weeks, it felt like a lifetime -a lifetime that I would gladly repeat over and over.

This post was actually written in summer of 2011 after I took the “Whales, Seals, and Sharks” course at Shoals. Since then, I have also taken their “Field Ornithology” course which I will post about soon. For more information about the lab check out www.sml.cornell.edu. I highly recommend all of the classes they offer and would be happy to answer any and all questions about the lab.